What is a satellite phone?

A satellite phone or satphone, is a phone that works by connecting to a telecommunications satellite in space. Unlike the mobile phone and the GSM network, its efficiency does not depend on the terrestrial transmission antennas installed by different mobile operators to cover a territory. In the case of a satellite phone, transmitted and received signals pass through satellites placed in orbit around the earth. The distance between Earth’s satellites depends on the position of the satellites in low orbit or geostationary.

In 1989, the world leader in telecommunications at the time; Motorola proposed the first portable telephony system based on telecommunications satellites. This revolutionary idea was not only for navigators and great adventurers, but also for certain emergency situations, such as a rescue in the open sea or access to an isolated rural area affected by an earthquake or any emergency.

Use of Satellite phone

A satellite phone is designed to work outdoors, mainly where the mobile phone is not operational due to the lack of a network, more often in very isolated places and, to times, in extreme conditions. The satellite phone was born out of a real need in the late 1980s: to create a cell phone capable of receiving and making calls anywhere in the world, even in the most isolated regions not covered by conventional antennas, for example in the heart of the Himalaya mountains, in the middle of the African desert, in the Amazon jungle or in the middle of the oceans.

Each mode of operation has advantages and disadvantages. Low orbit satellites require a more complex architecture and there is a risk of connection interruption during transmission between the satellites when they disappear on the horizon, this means that the coverage is excellent, even in polar and mountainous regions, which do not always This is the case of satellites in geostationary orbit because if a user is in a cave or at the bottom of a valley, the connection will not be possible.

The cost of operating satellites in geostationary orbit is less, but the distance they are found results in a longer and more limited connection time, this is why that manufacturers create bigger and more powerful satellite phones.

Advantages of a satellite phone

Who invented the satellite phone?

The first satellite phone was launched by Motorola about 30 years ago, in 1989. At that time, the Motorola firm was the world leader in satellite telecommunications. The satellite phone was invented to overcome the limitations of the classic GSM mobile phone: to be able to communicate by phone in any isolated area of ​​the planet, on land and sea, where there are no terrestrial antennas. Satellite phone is particularly useful in the most isolated regions of the world such as mountains, forests, poles, deserts and in the middle of the ocean.

Can we rent a satellite phone?

Yes. Rent a satellite phone is possible and can be interesting for specific uses for a short and limited time. Offered to professionals who need a satellite phone, for a few days and a few weeks, sometimes up to a few months.

If you request a satellite phone on our website, it will be delivered to the address of your choice within a few days before the start date of use with the SIM card and other accessories (battery, charger, etc.). At the end of use, you must return the phone to the address indicated by our company.

Turn your smartphone into a satellite phone

If you have a smartphone, it can become a satellite phone. To achieve this, you must purchase an adapter manufactured by Thuraya called Thuraya SatSleeve , which is the UAE satellite operator for the UAE. The device is actually a kit consisting of a battery and a retractable antenna that connects to the smartphone.

You can also download the Satsleeve mobile application, available for free on the App Store and Google Play, from the Internet and benefit from Thuraya’s satellite coverage in Europe, Africa, Asia and Australia. Satsleeve not only allows you to communicate by phone in places that are not covered by terrestrial antennas, but also to send SMS, emails and know your geolocation if necessary.

What are the models waterproof satellite phones?

Several satellite phones are capable of withstanding water, shock and dust, including Inmarsat phones IsatPhone 2 and the Iridium 9575 Extreme . These two devices have an IP66 protection rating. They are perfectly resistant to dust, rain and water jets and in the most extreme conditions. The Inmarsat IsatPhone 2 integrates a full range of services (SMS, email, call forwarding, call waiting, help button, etc.) and the sound quality is excellent. Iridium 9575 Extreme is a compact and very robust satellite phone, it can be used anywhere in the world, even at the poles.

Where to buy a satellite phone?

You can buy a satellite phone packs with prepaid card from our Verasatglobal.com store. If you have doubts or any questions, contact our specialized support so that we can clarify your doubts and advise on the purchase. 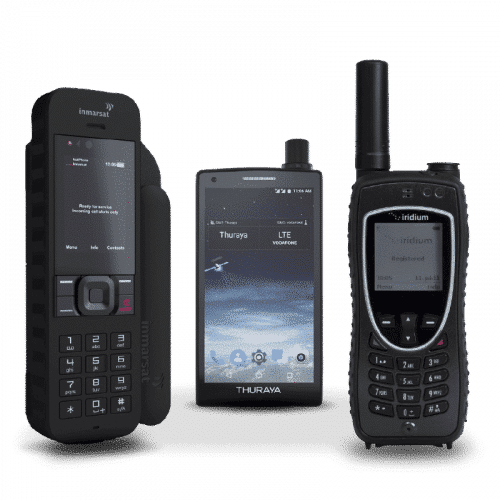